Hi everyone! Before you read on I just need you to know you are not in the wrong blog. This is still wiraasmo.com and I’m just taking over a tiny bit of his space. ☺

I’m Tristan, Wira’s friend from Manila, Philippines, and I tagged along with him to the beautiful city of Yogyakarta (or “Jogja” as most people call it) in Indonesia. 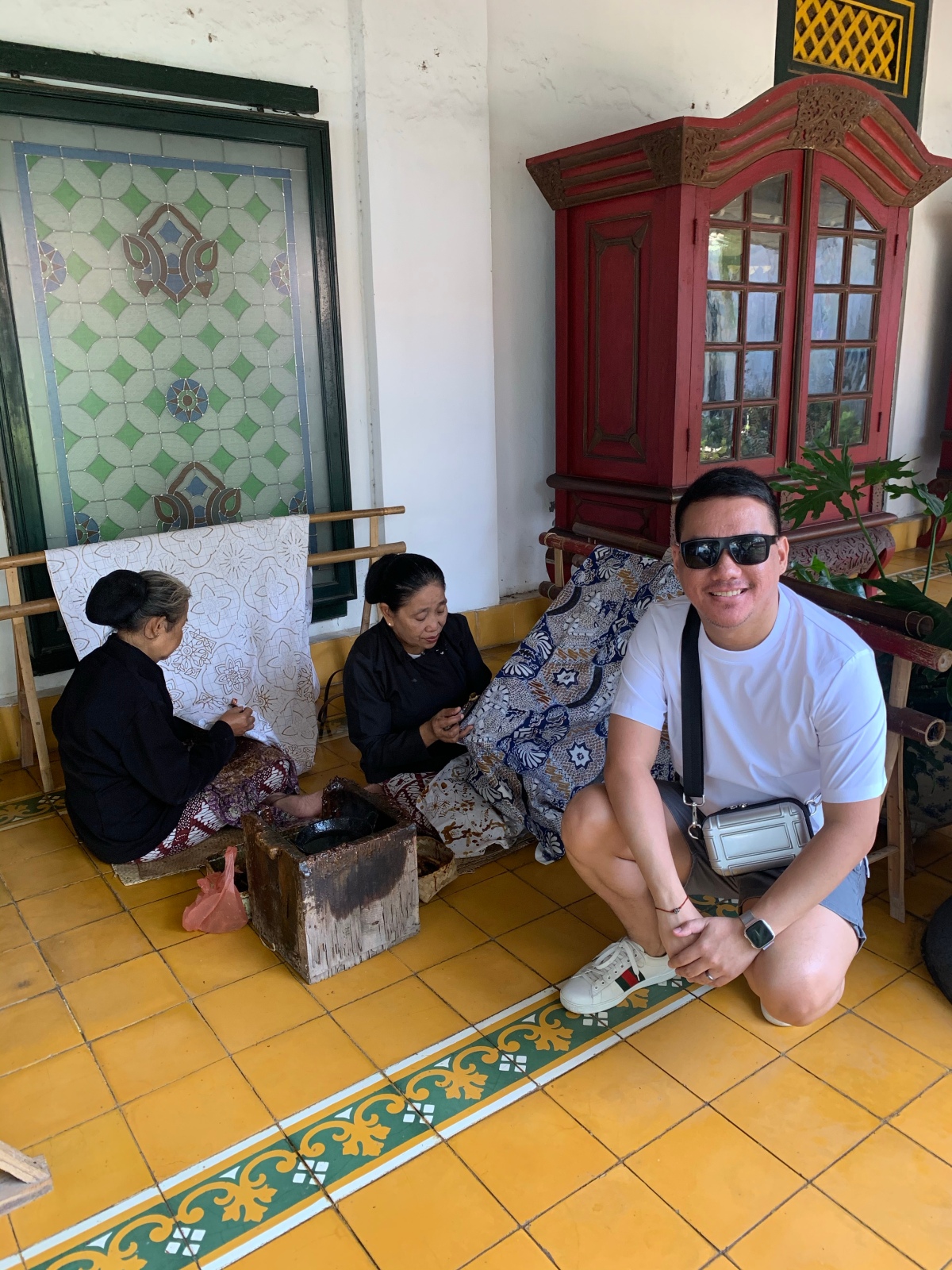 I haven’t heard of Yogyakarta until Instagram became popular. Most of the time I would see these inverted cone-shaped structures featured as one of the top tourist destinations in Asia in travel accounts or through influencers. And through their stunning photos, I made sure to write it in my bucket list to visit Yogyakarta one day.

That day finally came when Wira invited me to join him in his vacation. Of course this was an easy yes for me because I’ve always believed that the best way to explore a foreign country is by being with one of its locals. Imagine having a translator, tour guide, and Indonesian food enthusiast all-in-one throughout the trip? Count. Me. In. (Thanks again, Wira!) 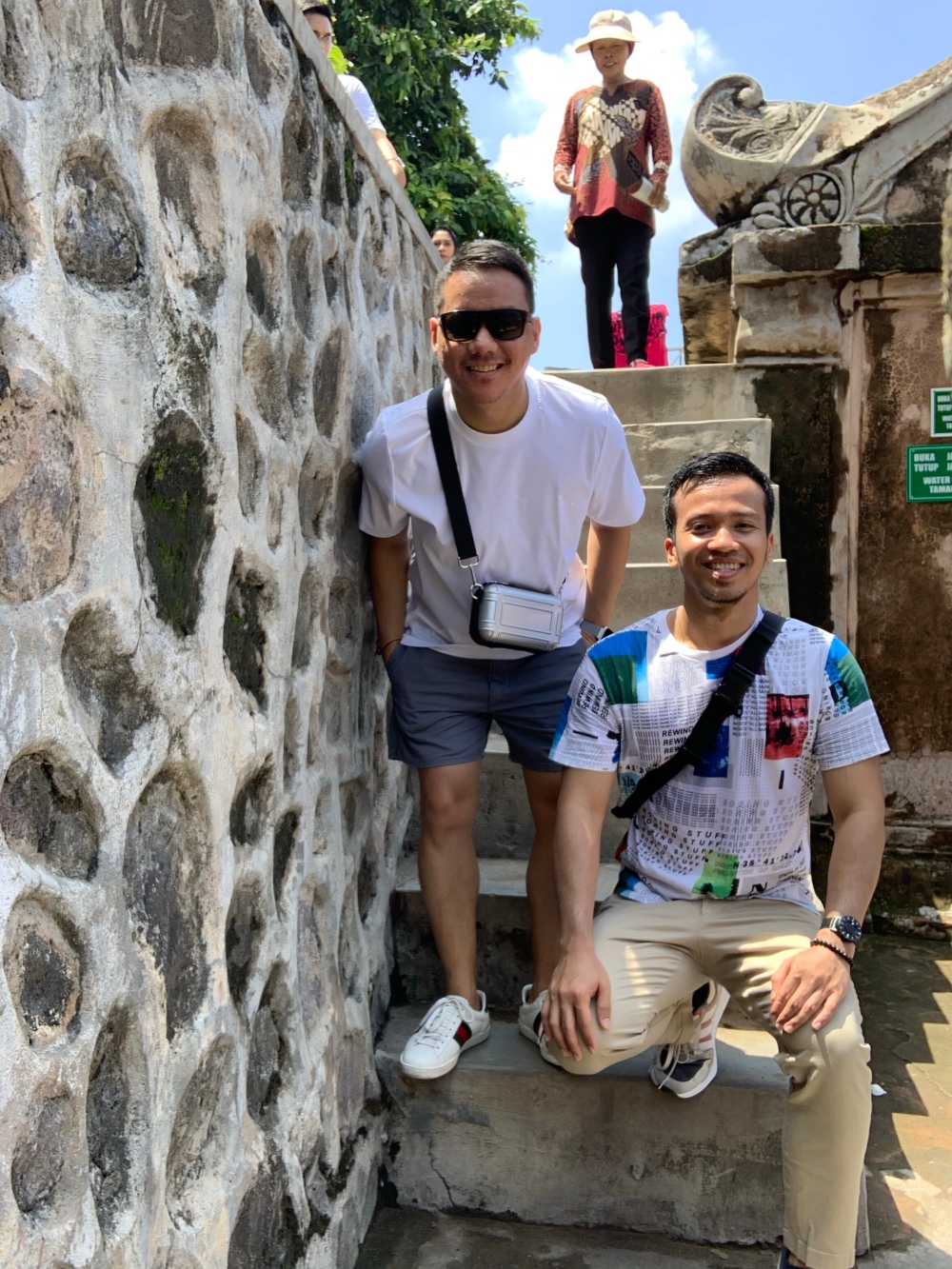 One of the essentials (if not the most important) for anybody traveling to Jogja is to do a temple run. By run I mean visiting not just one temple but going through the different temples in Yogyakarta. It would be a colossal mistake not to do this.

There are several temples in Jogja but since we were only on a 4-day trip, we chose to visit the more popular temples in one full day.

How Do You Get to the Temples?

We booked the Yogyakarta All-Time Favorites Private Day Tour via Klook (worth PHP 1600+ or USD 30+ *) that would take us to the Borobudur, Pawon, Mendut, and Prambanan Temples.

The tour consists of a private car with driver that would pick you up and drop you off at your hotel. It does not include entrance fees, meals, or other expenses.

I highly recommend getting this if you want to move and take photos at your own pace without having to worry about other people. Plus, the driver is your other source of information as you can ask him about his knowledge of the temples. (Thanks, Kuya Noor!)

Sunrise at Borobudur…and a Volcano Eruption?!

The first stop in our temple run is Borobudur, a UNESCO World Heritage Site built in the 8th and 9th centuries. It is the largest Buddhist temple in the world housing the inverted cone-shaped structures (called “stupa”) I mentioned earlier.

Most of the features I’ve seen online say it’s best to catch the sunrise in Borobudur. I’m not a morning person but something about the idea of starting the day in a place of worship, sacrifice, and prayer made it all good and fine to wake up at 2:30 a.m.

Our driver picked us up at 3:30 a.m. and we traveled for an hour to the site. It was still pitch black when we arrived but there were several tourists already there. Good news was there weren’t as much visitors that day (we went on a Thursday) than we expected. Bad news was unfortunately, levels 9 and 10 of the temple are closed effective that day until an unspecified time in the future. ☹ This meant we could only go up until the 8th floor.

Before going up the temple don’t forget to use the toilet already (there’s none up there) and bring your jacket, shades, umbrella, sunblock, and camera.

Off we go! It was a 5-minute walk from the ticket booth to the base of the temple and it was dark so the flashlight very much came in handy.

The temple consisted of the base, body (made of six square platforms), and the top (three circular platforms with stupas). We went straight to the top (or level 8 in our case since the actual top floors are closed) where all the other visitors were taking photos and waiting for the sunrise. The stairs are a bit narrow and steep so be careful! 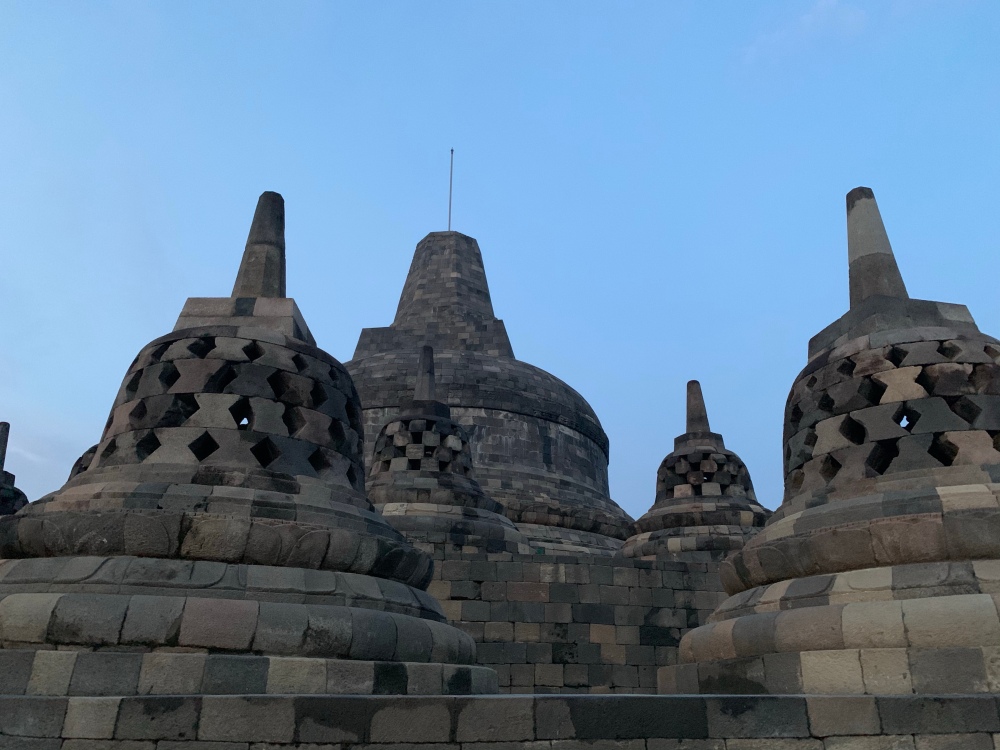 The moon was still above us when we reached the top at 5 a.m. but after around 10 minutes, a glimpse of light started to emerge from the horizon and we could now see the silhouette of the stupas, the people we were with, and twin volcanoes, Mount Merbabu and Mount Merapi.

The scene felt like it was lifted from a film. It was magical and truly a blessing to be in that moment. As the sun rose, this Coldplay sunrise performance at the ancient citadel in Amman, Jordan played in my head. It was as beautiful as that. ❤

We were welcomed by a sky with hues of blue, yellow, and orange just like in a painting. But wait, what is that gray cloud above one of the volcanoes??

Wira checked his phone and confirmed that it was Mount Merapi spewing ash. I watched as it happened and thought what the hell would we do if this became a full-blown eruption?! I have no idea. ☹ But thankfully, it only lasted for a few minutes and the volcano stopped. *phew*

Later on I would learn from Wira’s friend, Abdul, that locals consider the Borobudur sunrise and Merapi’s coughing as a blessing. I am a believer of these things so I’ll gladly take it. ☺

According to Wira, there’s another popular belief that if you touch Buddha inside the stupa, you will receive good luck and your wish will be granted. Of course I had to try it and it’s not an easy feat as you would think especially since you can’t step on it to reach for the inside.

I was able to touch the foot of the statue but when I peeked inside, I discovered the Buddha was headless! I still hope my wishes will be granted haha! Also, I’ve come to learn later on that I broke the rule as tourists are banned from touching Borobudur statues so keep your hands to yourself and don’t try what I did!

After we took our money shots which you can see more of in our Instagram feeds (shameless plug to please follow @hellotristan and @wiraasmo ☺), we checked out the lower levels of the temple. Its walls are decorated with intricately-carved reliefs and you can’t help but be amazed by the rich history this structure holds. 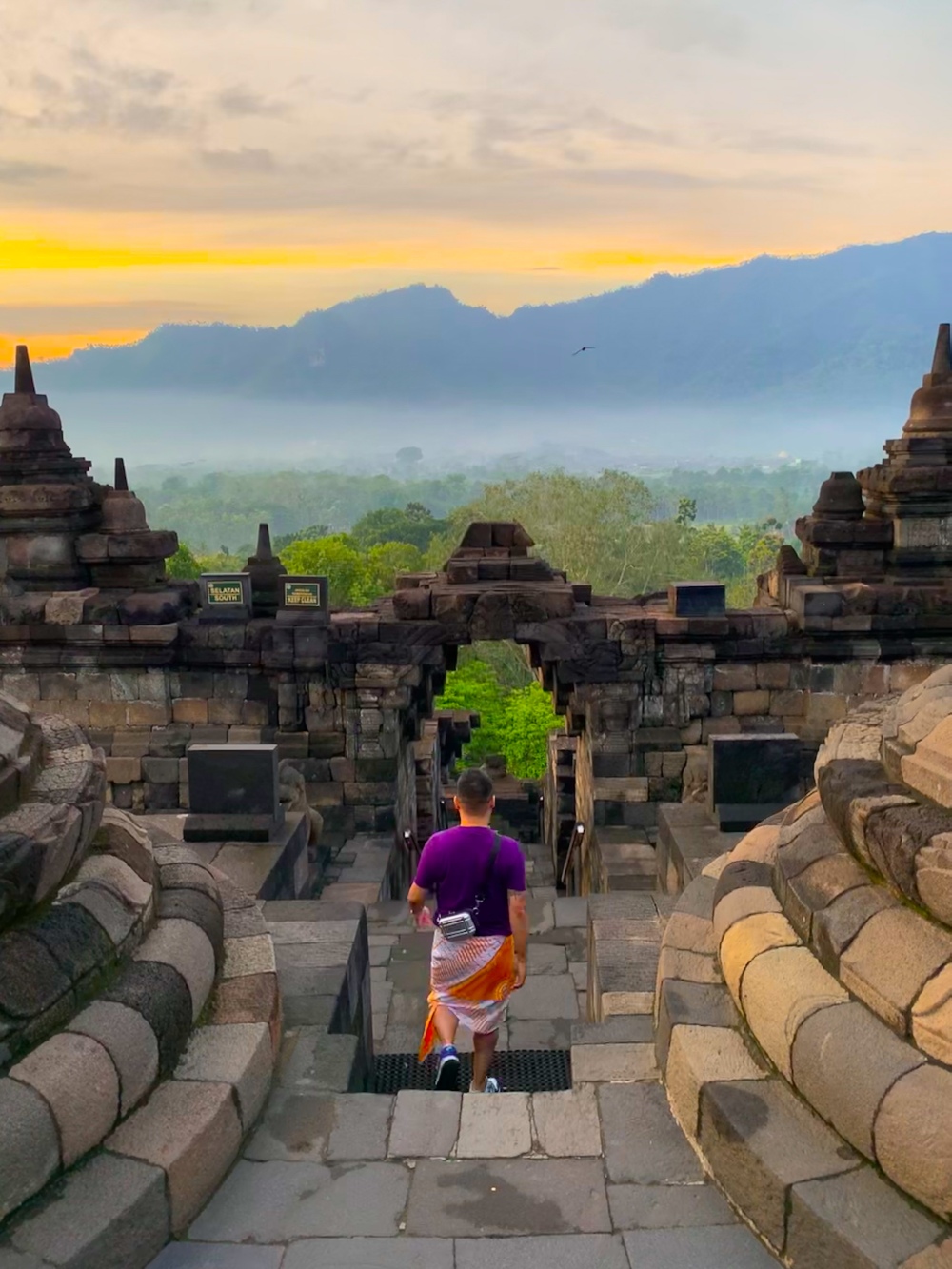 After touring the temple, we returned our sarongs and flashlights then were given a batik scarf as a souvenir. We were also directed to the breakfast buffet which served Indonesian food. Yum!

Before leaving the place Wira invited me to try the free batik painting session. I was already sleepy and tired by this time but the activity turned out to be a relaxing and fun one! We were able to chat with the pro batik makers as we painted. It’s another first for me so I’m glad I accepted the invite.

Three Buddhist Temples in One Straight Line a Coincidence?

From Borobudur, it was a 7-minute drive to get to the two other Buddhist temples, Pawon and Mendut.

This was a short picture-taking stop in our tour but what’s interesting about these temples is its placement. Pawon Temple (or Candi Pawon as locals call it, candi meaning temple) is located between Borobudur and Mendut. All three of these temples are placed in one straight line. Given that these were also built in the 9th century as Borobudur, it is said that there exists a symbolic relationship among these three.

Inside the Mendut Temple are three giant statues with a high triangular ceiling. I didn’t notice if there were yellow pin lights in the temple but it felt and looked like I was in a room filled with gold because the statues were glistening. It was a bit scary and humbling at the same time to be in a really sacred place.

Outside the temples are shops where you can buy souvenirs (like the miniature Borobudur stupa with matching Buddha that I bought) for keepsake or pasalubong to your loved ones.

The journey to Prambanan Temple takes 1.5 hours so this is a good time for you to sit back and relax.

Similar with Borobudur, Prambanan is also a UNESCO World Heritage Site. It is the largest Hindu temple in Indonesia dedicated to Shiva, their Supreme God.

We entered the huge compound and saw six towering shrines – 3 temples dedicated to Vishnu, Shiva, and Brahma, and 3 temples for the animals who serve them. 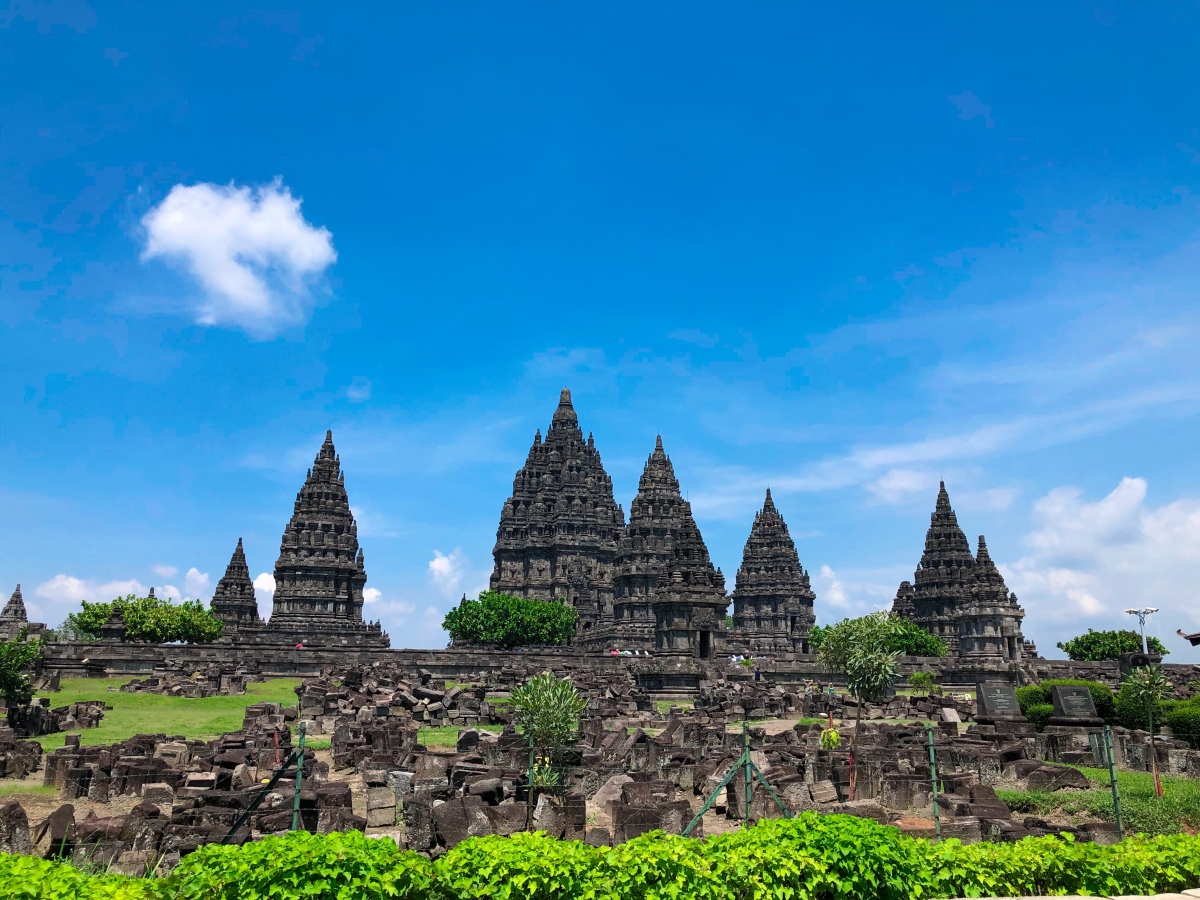 Although this is a Hindu temple, it felt very much like I was in the temples of Bangkok, Thailand. I don’t know if it was because of the scorching heat or the hundreds of people at the venue (much more than in Borobodur) or both. So pro tip: bring an umbrella, shades, cap, and water!

We initially planned to enter all six shrines but because it was too crowded and hot (plus tired from the earlier tour), we just entered Brahma’s temple and the biggest one, Shiva’s temple.

The temple had a 3-meter high statue of Shiva the Destroyer at the center but around it were small chambers containing Hindu gods related to Shiva – Durga (north chamber), Agastya (south), and Ganesha (west).

After entering the temples and taking pictures, we rode an open-air mini-train that took us around the compound and closer to the exit where we saw smaller temples. The train ride was free for me but locals had to pay IDR 10,000. Wira enjoyed some fruits as we rode while I had one of my favorite childhood chocolates, Choki Choki!

Before riding our car back to the hotel, we also passed by the souvenir shops near the exit with lots of local goods.

If you happen to visit some part of Indonesia, I highly recommend taking a side trip to Yogyakarta and going on this tour. My only suggestion is to take the Prambanan tour closer to sunset (and maybe on a different day as Borobudur if you have the luxury of time) so it’s not as hot and you have all the energy to take in these beautiful places.

My trip to Jogja didn’t end with the temple run as we did it on day 2 of 4 but after being on this tour, I already felt like my Jogja experience was complete. I had a lot of beautiful memories there but I consider this the highlight of my trip.

I used to just see these places in books and social media so it was magnificent being in front of these larger-than-life structures with centuries’ worth of history in person.

This was my first time in Indonesia (certainly not the last) and I’m glad I spent it here with great company!

Until we meet again,